You are here: Home / Articles / Care system in the UK / How the care system puts patients at serious risk of harm 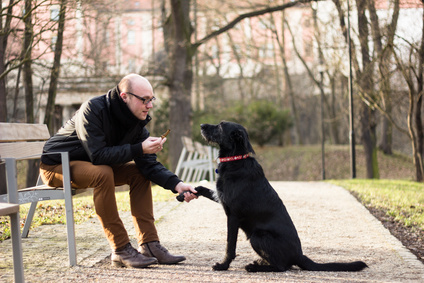 Alistair shared his father’s story with us about the lack of care and coordinated thinking in his father’s case. It’s a seeming lack of concern for a frail and vulnerable man – and it shows how people in care homes can be invisible to the wider NHS.

His story highlights how, in this context, the care system puts patients at serious risk of harm.

Alistair also makes an interesting comparison between his father’s ‘care’ and that of his dog.

(Names have been changed to protect the father’s identity.)

Five months ago, my father who is 92 and lives in a care home in the south east of England, was taken ill. He said he had diarrhoea and stomach pains.

As it happens, at the same time one of my elderly dogs had a similar problem and we took her to our vet.

The care home monitored my father, as the staff said that this happens often with the elderly and they often recover after a few days. However, they didn’t think there was much wrong with him. A week later my father said he was feeling worse.

In the meantime, the vet had now thoroughly examined my dog and said he was not sure of the precise problem. Further tests were needed, which included a stool sample. He gave her an analgesic to help her with the discomfort.

After three weeks my father was now losing weight and said he was having to empty his bowels after almost every meal, but the care home said they still had no evidence of diarrhoea.

The results of my dog’s stool test came through from the Path Lab the following day, by email. She had a bacterial infection of the small intestine. The vet gave her antibiotics and within five days she had made a full recovery.

After a whole month, the care home decided to send my father to the doctor, who concluded that he could not find anything wrong with him. He thought my father may be making it up, but as a precaution reviewed and modified my father’s medication for diabetes and gave him anti depressants. He also arranged for a stool test to be undertaken. The test came back 10 days later as ‘negative’. It now also turns out it was the wrong test.

My dog is now ‘full of beans’ and has now resumed hunting and spends her days chasing rabbits.

After another month, my father is finding it difficult to walk, has lost 12 kg and says that he has constant diarrhoea and feels very ill and spends most of his time in bed. I phone the doctor who reluctantly talks to me. He says there is not much more he can do, but maybe my father should have a colonoscopy. He said he would arrange this, but the waiting list is more than two weeks long. He said he saw no point in visiting my father as he was being well cared for.

My dog catches her latest rabbit.

I decided to seek private help and made an appointment at the local private hospital for my father to see a specialist. The next day I took my father to the hospital and paid £150. After 20 minutes the specialist concluded my father most probably has complications as a result of the winter vomiting virus he had in August. He gave my father a prescription to coat the lining of the small intestine and wrote to my father’s GP suggesting a further stool sample be taken.

He ruled out a colonoscopy due to my father’s fragility. He also recommended a number of medications that could be given to make my father more comfortable, should the first medication not work.

My dog catches her second rabbit.

The stool sample was sent to a London hospital. My father’s condition further deteriorated. He is now spending most of his time in bed asleep, exhausted and now totally incontinent. He was moved to the nursing floor of the care home – for an extra charge.

After a further phone call I eventually persuaded the GP to visit my father. He concluded there is nothing more he can do, as he says my father is well cared for and we have to wait for the results of the stool test (which he then said he had never heard of – and that he would not be able to interpret the results).

Today my dog catches a squirrel.

My father was now at death’s door and when we visited him he was always asleep. His weight continued to drop – to 61kg from 77kg in three months. After three weeks there were no signs of the stool test results and the GP refused to chase them, saying we have to be patient and “the results will come when they are ready”. One of the care staff at the home phoned the Path Lab to chase the results but they said they would only speak to the GP, who was now on holiday for two weeks.

The receptionist from the vet phoned me as part of their follow up to ask how my dog was.

We were expecting my father to pass away over Christmas. In a last ditch effort to save him, I phone the GP’s locum, who phoned the Path Lab and chased the results. The results arrived on Christmas Eve by fax saying my father had raised calprotectin levels, and suggestions for treatment were made. My father received his first medication later on Christmas Eve and we hoped it would work. As it happened it made matters even worse.

Dare I say the moral of this story is that if you are old and ill in this country, you can expect better treatment if you are a dog. My father has unnecessarily suffered pain, distress and humiliation for months due to the failure of our National Health Service.

My father has a new GP, and this is the note I recently sent to the new one:

“I visited my father yesterday, and he seems to have taken a downturn. A small piece of cake caused severe diarrhoea within five minutes of eating. It is possible that this may be a reaction to dairy cream which was given to him yesterday, despite care staff knowing he should be on a non-dairy diet.

As we have no notes, due to the change of GP and for the unbelievable fact that the new GP cannot have his notes for up six weeks (why?) and the almost certain long wait for a NHS specialist to examine my father, could you please advise me of a reliable private consultant that you work with, so that I may make an appointment to have my father examined.

I am deeply concerned that four months after the first symptoms appeared we still do not have a precise diagnosis. I am not prepared to stand by and let the system kill my father.”

I have been informed that if you change GP’s the new GP has to request your notes, by letter, to the NHS local HQ. They then write to the old GP and ask for the notes. Then, once a week, a courier collects the notes from the old GP. They then go to a central NHS ‘Post Office’ where they are sorted and then sent on to the new GP. This can take six weeks!

I phoned the ‘NHS post office’ today and asked why they are using such an antiquated method and was told, “That is the system.” I asked why the old GP couldn’t just send the notes to the new GP – and why the notes can’t be online. Both questions were met with hysterical derision. No wonder the NHS is in such a mess.

I have made an official complaint, and NHS England is undertaking an urgent investigation.

After weeks of chasing, the GP finally informed me of an appointment for my father with a gastro consultant at a local hospital. The problem is that my father is now so ill that he is bed ridden and doubly incontinent. They want me to get him to the hospital, in the freezing cold, so that the consultant can talk to him where the consultant works, for the convenience of the consultant. There is no way that anyone will visit him in the care home. This is like living in Dickensian times.

Alistair’s story no doubt resonates with many families up and down the country who may also feel that the care system puts patients at serious risk of harm. At the same time Alistair is also having to battle for NHS Continuing Healthcare funding for his father.

If you’ve come up against a similar situation or have a comment about this, please share your thoughts. What can we do to make things better?